By Ben Shpigel
Published in The New York Times

“Optically, it’s intimidating,” said Chip Bowers, the Warriors’ chief marketing officer. “You look at 20,000 gold T-shirts in the crowd, you know you’re in an opposing venue.”

In other years, perhaps.

Gold may be a rare commodity, but these days, it is saturating the sports world. All four teams in the championship rounds of the N.B.A. and the N.H.L. feature the color, in one shade or another, on their uniforms and logos.

A monochromatic milieu of gold-clad fans waving rally towels of the same hue has rendered venues virtually indistinguishable. The color emblematic of home now represents the enemy, too.

Only one of the contenders has actively fought the conformity.

The Cleveland Cavaliers would rather watch a loop of Michael Jordan drilling The Shot over Craig Ehlo than distribute gold items with the Warriors in town for Game 3 on Wednesday. 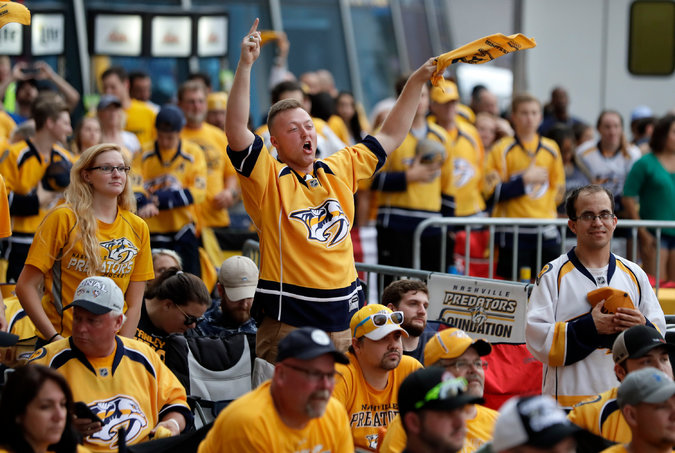 “We believe in every sense of the word that we own that color,” said Tracy Marek, the chief marketing officer for the Cavaliers, who were known as the Wine and Gold even at the team’s inception in 1970. “But we’re not going to do anything that will make us look like we’re rooting for Golden State — let me make that very clear.”

Marek said she and her staff had been expecting Cleveland’s third consecutive N.B.A. finals matchup with the Warriors for months, and had planned accordingly.

Unlike the three other finalists, the Cavaliers are not committed to gold. They choose from several options for their giveaways, waiting from series to series to pick which color to accentuate, so they cannot be mistaken for their opponent.

On Wednesday, the giveaway T-shirts will probably be black. The rally towels will be white. They always are. Passing out gold ones in Cleveland, where Pittsburgh football fans routinely invade the Browns’ stadium and wave the Steelers’ famous canary Terrible Towels, might spark a mutiny.

Nevertheless, demand for the prevailing hue in sports has threatened to deplete the nation’s supply of blank gold T-shirts and rally towels. For the Warriors, the precision of Stephen Curry’s shooting has been matched only by the prescience of their marketing department. Bowers ordered 312,000 T-shirts in the team’s vibrant golden yellow — enough to outfit a capacity crowd at Oracle Arena for every potential playoff game — back in September. 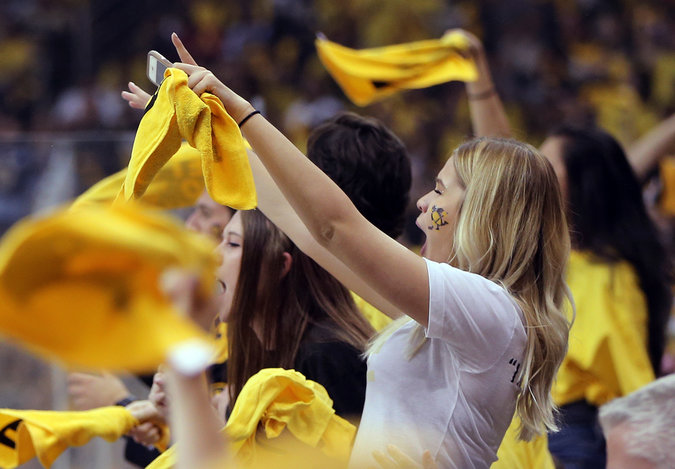 The Pittsburgh Penguins circumvent potential shortages of their gold T-shirts by stockpiling a full house’s worth, about 19,000. Credit Keith Srakocic/Associated Press

“There’s not a huge number of those shirts produced,” he said, “but there are a number of teams that use them.”

In general, those shirts are harder to obtain than towels, said Kevin Nord, who deals in both items as the president of Pro Towels in Pittsburgh. His company stashes about 250,000 towels in gold, which, he said, is a relatively popular color — far more common than the Kelly green of the Boston Celtics or the gray of the San Antonio Spurs.

He notifies teams a round or two in advance if a supply is running lean, as he had to do with the Predators’ shirts for the Western Conference finals because he had already committed to the Penguins.

“And that’s the dicey part — everybody was using so much gold,” Nord said.

The sports merchandise agency BDA, which manages the purchasing process for several teams in the four major professional sports, averts a gold rush by starting to procure stock three to four months before a league’s playoffs begin.

Steve Avanessian, the agency’s vice president for client relations, said an internal matrix, updated daily, accounted for teams’ postseason probabilities and potential playoff opponents, allowing BDA to determine how many items of a particular color it needs to provide. 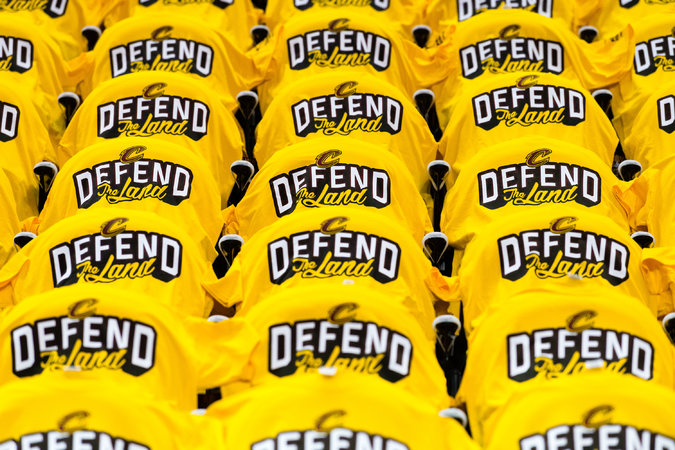 Shirts awaiting spectators in the stands at the Cleveland Cavaliers’ arena before a playoff game against the Toronto Raptors last month. The team’s marketing department says it has ruled out gold giveaways when Cleveland hosts the Golden State Warriors in the N.B.A. finals. Credit Jason Miller/Getty Images

The abiding principle, Avanessian said, is assuming from the outset that every contending team — even Nashville, which was the lowest-seeded entry in the N.H.L. playoffs — has an equal chance to win a championship.

“If it was us and three other teams with different colors, the conversations would be much different,” said Danny Shaklan, the vice president for marketing and communications for the Predators, whose gold — more of an egg yolk, really — is the exact shade used by the Cavaliers. “They’d tell me how much is out there, call me when you want. But it’s pretty intense right now.”

The Penguins circumvent potential shortages of their gold T-shirts — daisy, officially — by keeping available a full house’s worth, about 19,000. They thought they had that many heading into Game 1, but a careful count revealed that they were short by 4,000.

Scrambling just before Memorial Day weekend, James Santilli, the team’s vice president for marketing, called a friend who works for FedEx. He helped arrange for a supply at a cotton company in Virginia to be sent to Pittsburgh for printing.

The Penguins have a sufficient quantity for the rest of the finals, Santilli said, though the Predators booked enough gold shirts for only Games 3 and 4. Shaklan said there could be a different giveaway if there is a Game 6 in Nashville — “Our fans wear gold to games anyways.” The Predators, trailing the best-of-seven series by two games to one, hope to see that.

But regardless of when the Stanley Cup finals end, or who wins, one team will provide the most incongruous sight of the series: hoisting a chalice of silver amid an ocean of gold.

A version of this article appears in print on June 5, 2017, on Page D1 of the New York edition with the headline: Where Gold Cloth Is the Standard. Order Reprints | Today's Paper | Subscribe