As the action heats up in the Major League Baseball playoffs, screen printing machines are running around the clock as suppliers and distributors produce rally towels for rabid fans. With the Washington Nationals, Cleveland Indians and Arizona Diamondbacks all in the running this year, red towels are in high demand. Top 40 distributor Bensussen Deutsch & Associates (BDA; asi/137616), the official premium merchandise supplier of MLB, has produced 1.3 million red towels for the playoffs – in addition to royal blue, orange and navy towels.

“Producing and delivering the rally towels for the MLB playoffs can definitely be a logistical challenge,” said Steve Avanessian, vice president of client services at BDA. “Due to the nature of the game, we often don’t know which teams will advance until the last second.”

Pittsburgh-based supplier Pro Towels (asi/79750), which handles many of BDA’s orders, prepares for the MLB playoffs beginning in June. “I appointed one of our sales reps, an absolute sports nut, to monitor the MLB playoffs,” said Brain Porter, vice president of North American sales at Pro Towels. “Every three or four weeks we have a sit down, as we do for every sports league. But it’s easier with basketball and hockey because you kind of know who’s in or who’s out.”

While the initial orders were placed this year, Pro Towels opened a new production facility in Las Vegas. Porter says the new facility allows for more capacity and production capabilities for orders like the rally towels. During the transition, workers in Pittsburgh moved to the west coast to help train new personnel, Porter says, so the company could hit the ground running come October.

“Volume wise, this has far surpassed anything we’ve done,” Porter said. “In the last five years, we’ve taken over the market place. We like to tell teams that if you don’t go with us, your chances of winning the championship are low.” 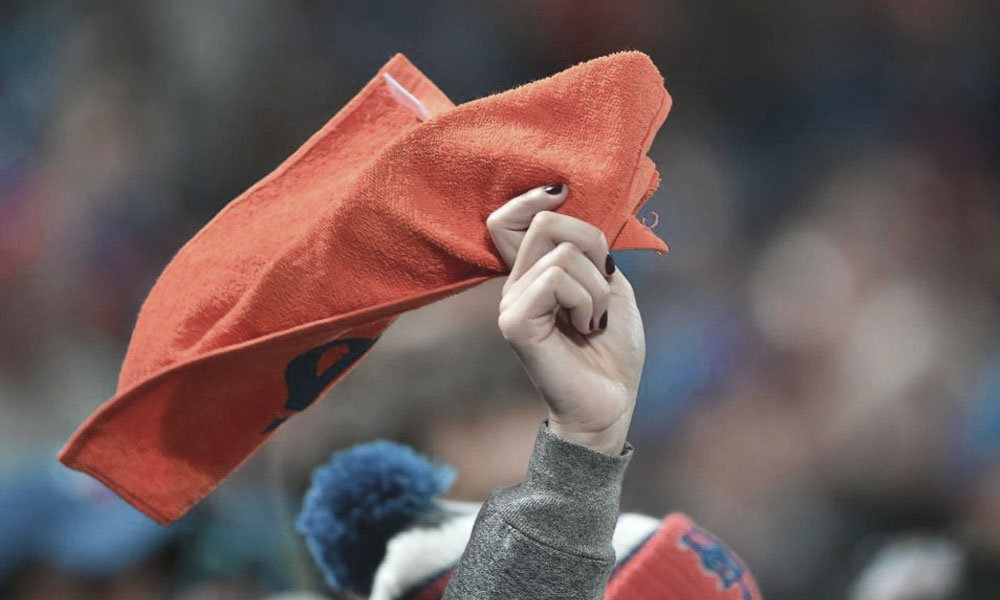 This year, MLB has outlawed all pale-colored towels in an effort to make the ball more easily seen while in the air. The decree benefits players, but it also forces franchises to spend more money.

In May, BDA checks the standings and projects the inventory, estimating how many towels must be produced and dyed. At the end of August, BDA informs contending teams (even the Boston Red Sox and New York Yankees, who traditionally don’t invest in rally towels) of ordering deadlines for every potential game. The 15-by-18-inch terry velour cloth towels are then stored in warehouses across the country until teams reach out with the artwork and sponsor logos for decoration. “As soon as we receive confirmation, it’s all hands on deck to ensure an order is printed, shipped and delivered on time, every time,” Avanessian said.

Waiting on sponsors is the biggest challenge of the production process, Porter says. Most advertisers prefer the most anticipated games, like a Game 6 or Game 7, causing a last-minute frenzy for the design team. “It gets harder as the series goes on,” Porter says. “Everybody wants a spot on the towels.”

BDA assigns two drivers to each delivery truck, which have all been equipped with GPS units this year to improve the tracking process. The trucks can hold up to 50,000 rally towels and have a 24-hour window from pickup to delivery.