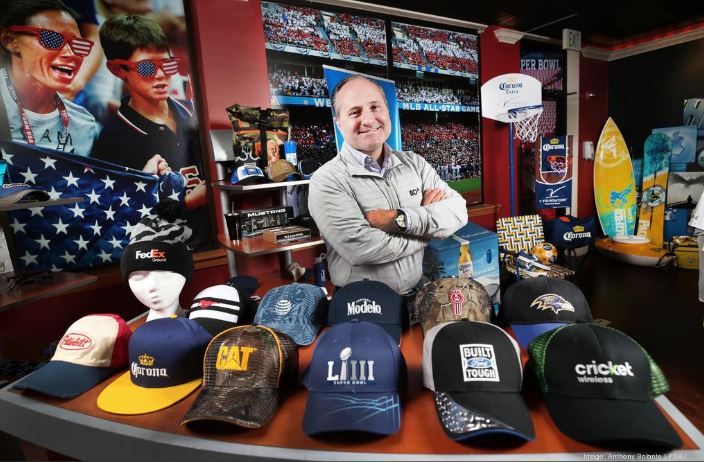 Jay Deutsch, the CEO of BDA and Associates of Woodinville, has turned 51, but he's not slowing down, at either work or on the court.

"I'm a short guy who still has game – and speed," said Deutsch, who stands a solid 5 feet, 8 inches tall. "I used to be a lot better, but I actually love and play a great basketball game."

Deutsch is also a dealmaker, landing a bunch over the past 18 months for the company co-founded. BDA designs and makes customized branded merchandise to Fortune 1000 enterprises, as well as sports leagues like Major League Soccer, the NFL football, Major League baseball, the NHL and global entertainment holding companies.

In the second half of 2017, Deutsch's BDA made three acquisitions (two in Europe, one in Boston), growing the business by 35 percent.

He also bought a minority ownership in Seattle's new National Hockey League expansion franchise, which will starts [sic] skating in 2021.

Deutsch recently sat down with the Puget Sound Business Journal to discuss BDA's start, its expansion, and role in Seattle's new NHL franchise. This interview has been edited for length and clarity.

How did you get started in sports branding and merchandising? When I was a high school senior, my friend and business partner Eric Bensussen and I called up the NFL. They gave us a license to make Seahawks merchandise and sell it to fans in Alaska. We've come a long way since then. We just turned 35 years old as a company on Nov. 18, and we're coming off 35 percent growth year over year in 2018. (That first Seahawks sweatshirt, proclaiming it as "Alaska's team," hangs in the company's showroom as "Job #1.")

What made you want to expand in Europe? A lot of our clients are global brands. Their reach isn't just in the U.S. So, they kept asking us, "Can you take us over to Europe or Asia?" And so we dipped our toe in and in 2017, we bought two companies in the U.K. This gives us a great base from which to service our U.S. clients and also to bring our expertise to what people call the "EMEA market," which is Europe, Middle East and Africa.

Who did you buy? We acquired the U.K.'s leading provider of specialist sports merchandise, Sports Merchandise Global. It gives us several clients and valuable relationships, including Manchester United, Tottenham Hotspur and Barcelona. We also bought Dukes of London, which supplied branded merchandise, web stores and storage facilities, and SwervePoint of Boston.

What's it like being one of the new NHL team's local minority owners? I am so proud to be part of this venture. I'm with a really great group of folks and everybody is involved. Bonderman is inclusive. When he talks, you hang on every word he says because he's really thought it out. Though he's majority owner, he doesn't act like that and seeks consensus, which is what makes him such a great leader.

How did you become part owner of the new team? For me personally, as a sports nut and sports merchandise executive, it's a little bit of a dream come true. The commonality for everybody, other than loving hockey and believing it's going to be a great investment, was Tod Leiweke. When he asked, I said a quick yes. All of us in the local investor group know Tod. What he's accomplished in the last six months is a feat no one else could have accomplished.

What is the timeline for the practice rink at Northgate Mall? Being in a mall and open to the public is pretty special. It's going to give a lot of access to fans — more than they think. We've not picked a contractor for that project yet. Everyone wants to start sooner rather than later, but having an extra year affords us the opportunity to do things right.

What will the team be called? I'm working with (majority owner) Jerry Bruckheimer on the name. We will likely whittle down a list of possible names to three. Then, we will consult fans before making a final decision. When it's ready, it's ready, but my best guess today is by this summer. At the end of the day, our goal is to pick a name Seattle fans are excited about, one they can get behind, and one that makes players excited to put the jersey on.

Can you update us on the new arena's naming rights? We're still in the process and we've had a fair amount of interest. Being from Seattle, people here take for granted how big their city is and just how many big companies there are located here with global operations, customers and connections. This is not just hockey plus Seattle Storm in the old Key Arena. This new arena is going to be something you're wowed by, the moment you walk in.