How Nationals bobbleheads go from concept to collectible 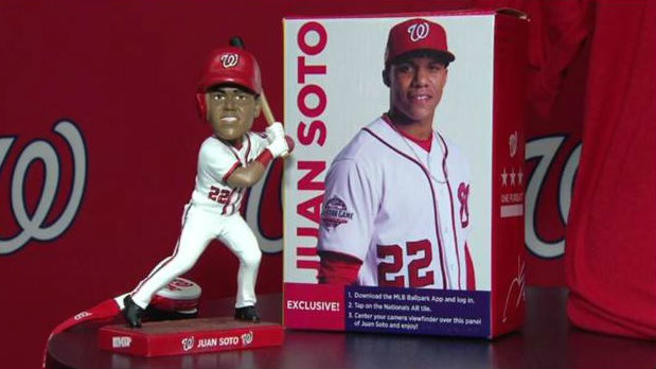 Not the real-life Soto. He's fine, still doing his day job in the middle of the Nationals' lineup. But Bobblehead Juan Soto is having a tough go after Eaton's three-year-old son, Brayden, dislodged his oversized cranium from his polyresin body.

Soto's bobblehead was part of a giveaway April 12. Trea Turner followed May 15. Ryan Zimmerman as "Captain America" was next on May 25. Saturday is Star Wars Day at Nationals Park, a glove-in-hand fit for closer Sean Doolittle, an obsessive fan of the series who will be wearing a cape and handling a blue lightsaber when distributed to 10,000 fans.

The path from idea to boxed giveaway within an interactive back is long. The Nationals begin planning their upcoming bobblehead promotions in July of the previous year. Talks with their vendor, BDA Inc., pick up in November. Conversations with players can begin around then, too, as they did with Doolittle. The Nationals knew Star Wars day was coming again through a league agreement. They also knew Doolittle was a connoisseur of all things Star Wars. So, when they approached him about the "Obi-Sean Kanobi" bobblehead, Doolittle asked for more time to research the proper color for his lightsaber (blue) and focused on movie-specific details in order not to be called out during his mid-June emergence from boxes.

"I think the biggest thing we had to make sure we had the lightsaber the right color blue because that's what Obi-Wan uses in a New Hope against Darth Vader," Doolittle said. "So I was happy about that."

"The hood thing I think is really cool, too," Doolittle said. "The hood is cloth, so you can put the hood up and down. It's pretty sick."

Doolittle's high level of nerdom is rare when it comes to mapping out details. Washington's promotional staff was thankful for Star Wars tutorials he was more than happy to provide. But, his involvement is not an outlier. When conversations move from the inside the organization to the players, they often end up with significant involvement. Juan Soto wanted his bobblehead changed to have a smile. Typically, an "in-action" bobblehead -- swinging, fielding, running -- would not come with a grinning player. Soto felt the smile reflected his personality. So, smile it was.

Players can go back-and-forth on facial hair, hairstyle, wearing wrist bands, jersey color and a large swath of other details. Meanwhile, the team's promotions and events department, headed by director Lindsey Norris, is watching the calendar. A bobblehead takes about 150 days from idea to box in Nationals Park. Norris retrieves a flood of photos to provide BDA positioning options, player details and all-around visual clues. They use computer-aided design software to work mockups. The drafts are bounced between team, player and vendor in the early stages. Norris said the Nationals' creative team sometimes gets "very creative" in ways BDA has to reign back (for instance, the bobblehead would have trouble remaining upright if the original design went forward).

"Once we get that mold exactly right, everyone's happy internally, the player's happy, the vendor's happy, we'll move to that paint stage," Norris said. "There, we're typically in the final steps. Sometimes in the paint stages we'll catch things like, the Nationals, we have the tiny blue and red stripes. We get those details. That's where we paint those on. Literally. The fine details of the paint. Getting the skin tone right. I sit there with my pantone book and I'm matching colors all day. People think I'm painting walls, I'm painting bobbleheads. It's just getting it just right. We want to make sure our players are happy with the piece as well as the fans."

Bobbleheads were originally made of paper mache and held upright by a single metal rod. They were take-offs on porcelain figurines of the 1800s with movable parts. Howie Kendrick collects those hard-to-find versions.

The more modern, and stable, bobbleheads re-entered the market with fervor in 1999. Steve Avanessian, Vice President of Client Services at BDA Inc., says they are the top promotional driver at baseball parks. Distribute a bobblehead, and people show up, including those who may not be actual baseball fans.

As much as all factions are concerned about fans being satisfied, they're more worried about the players being pleased. Eaton has hundreds of bobbleheads at his home (he compared his desk to that of the MLB Network show "Intentional Talk" which is surrounded by bobbleheads). He'll ask clubhouse attendants on the road to gather the last five years' worth of bobblehead promotions and ship them out to him. Often, players ask for extras of their personal bobblehead to send to family and friends. The prevailing point is a simple one: you don't want your prime advocate to be dissatisfied, particularly in the age of social media.

"It's a really critical thing because the last thing you want to do is produce and distribute a collectible bobblehead and not have the player behind it," Avanessian said.

That's not an issue for Doolittle. A full-sized version of his Star Wars bobblehead arrived at the park a couple weeks ago, almost seven months after he began talking to the team about it. The removable hood is a first for the developer, one Avanessian said they may not make again. Doolittle was thrilled -- at least until he had to give it back. "I got to hold it for like five minutes," Doolittle said.

Overall, this is the third figurine of his likeness in the major leagues. In Oakland, a Sean Doolittle Gnome was distributed. Last year, the Nationals produced a more standard Doolittle bobblehead. Friday morning, his Star Wars bobblehead was already on eBay for up to $69.99, a full day before the handout at the park. And eagerly awaiting its arrival was Doolittle, who has been thinking about this since November.

"I seriously think it's like one of the highlights of my career," Doolittle said. "I'm pumped."